Each year, R&M trains young talents as carpenters in Wismar. During the last final examination, two apprentices highlighted their talent with the presentation of their journeyman pieces: Benjamin Bauer and Samuel Becker were nominated for the competition on national level. Samuel Becker was able to impress in the competition "Bestes Gesellenstück" (Best journeyman piece) and ranked second with his work. Benjamin Bauer was able to convince the judges at the professional young craftsmen competition "Profis leisten was" (Professionals perform something) and accomplished the first place. Due to his good performance, he qualified for the German Championships in Carpentry and Joinery 2017, which took place in November last year. 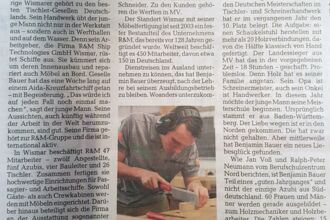 Benjamin Bauer knows a lot about wood, which he was able to prove at the championships. The task was to produce a rocking chair within 18 hours, of which half of the wood connections were traditionally made by hand. Under time pressure, he demonstrated his spatial imagination, practical skills and precision and finished tenth in this competition. Thus, he is one of the best carpenter journeyman in Germany.

Read also the German report about our carpentry in Wismar and our carpenter Benjamin Bauer in the Ostsee-Zeitung, a newspaper from the north-eastern state Mecklenburg-Vorpommern. (Click on the picture for enlargement)